Introduced in Season 9 as the 17th Legend, Valkyrie joined Apex Legends as a new mobility and recon character to the game. While vertical movement wasn’t a new concept, with Horizon’ Gravity Life and Octane’s Jump Pad, Valkyrie provides not only an additional way of traversal but some heavy power to your team's arsenal.

Kairi Imahara may be new to Apex Legends, but her family name is recognizable from the Titanfall series. Her father, code-named Viper, was a member of the Apex Predators and a pilot of the Northstar-class titan. When Kairi was young she dreamed of being a pilot like her father who warned her against it as a dangerous profession. Viper ends up being killed by you, the player, in Titanfall 2, but the last person Kairi sees before discovering her father’s death is Kuben Blisk, founder of the Apex Games. After hunting Blisk down he challenges her to be better than her father ever was. Knowing she could get to him was enough for Kairi, along with entrance into the Apex Games. With the help from Rampart, she salvaged parts from her father’s Titan to build a jetpack for herself and continue her father’s legacy. 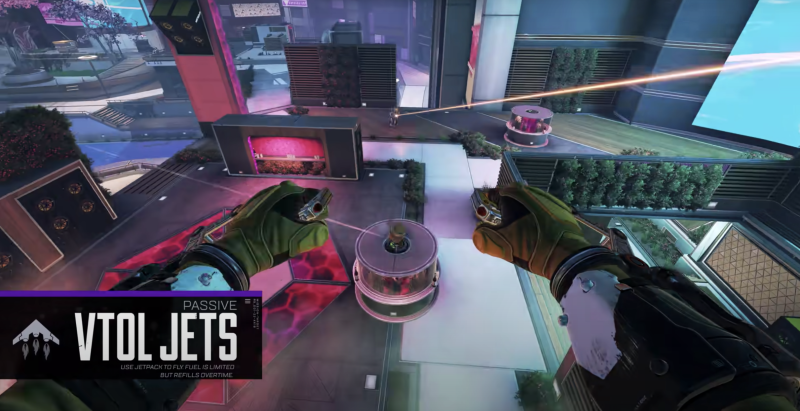 Valkyrie’s passive ability, VTOL Jets, allows her to fly and hover in the air for a designated amount of time-based on her fuel gauge, which refills over time. To use VTOL Jets you simply press your Jump button a second time while in the air or hold it to fly higher and/or hover. Maximum duration of VTOL Jets is seven seconds and your fuel gauge will begin to refill eight seconds after its last usage. Fully refueling from empty takes 10 seconds. While in the air, Valkyrie cannot use any weapons but can use her Missile Swarm ability.

When using VTOL Jets it’s important to pay close attention to your fuel gauge. When you run out you will fall to the ground without control, therefore you may not land exactly where you’d like to, potentially putting yourself into danger. After releasing your jets, there is also a one-second hand animation. When landing, keep in mind that there will be a short delay between landing and drawing your weapon. When you use VTOL Jets, Valkyrie will not gain momentum from things like sliding downhill or launching off Octane’s jump pad. Don’t assume you will be able to fly faster or farther after those actions.

It’s best to use VTOL Jets as an escape, rather than an engaging tactic. The flight doesn’t last that long but it does make for a more useful way to abandon a fight to a short and safe distance. Jets can also be used to reach higher areas on the map that might not be accessible by climbing, giving you a height advantage over your enemies.

Valkyrie also has the ability to scan survey beacons to reveal to her teammates the next circle enclosure on the map. Use your VTOL Jets when you can to access these beacons, and get away from them quickly so as to not be caught out in the open.

Valkyrie’s tactical ability, Missile Swarm, will activate 12 mini rockets from her jet pack in a 4x3 designated area. When hit, enemies take an initial damage of 25, then 3 every subsequent hit after that. Missile Swarm has a range of 12 - 100 meters and takes around three seconds to hit, no matter where the enemy is.

Missile Swarm requires vertical clearance to launch, making it unusable when fighting inside buildings. Because the missiles are one of Valkyrie’s best abilities, try to take most of your gun battles outside. Considering the range and delay of travel, aim your Missile Swarm where you think your enemy will be, instead of where they are. With a cooldown of 30 seconds, it’s best to save the ability for when you can aim it at two or more enemies grouped together. Also try to save them for the middle or end of a fight, rather than an engagement so they’re not wasted.

Missile Swarm is paired very well with Valkyrie’s VTOL Jets. Flying up above your enemies and then launching Missile Swarm down on them can catch them off guard or crowd control them towards your teammates for the final blow. 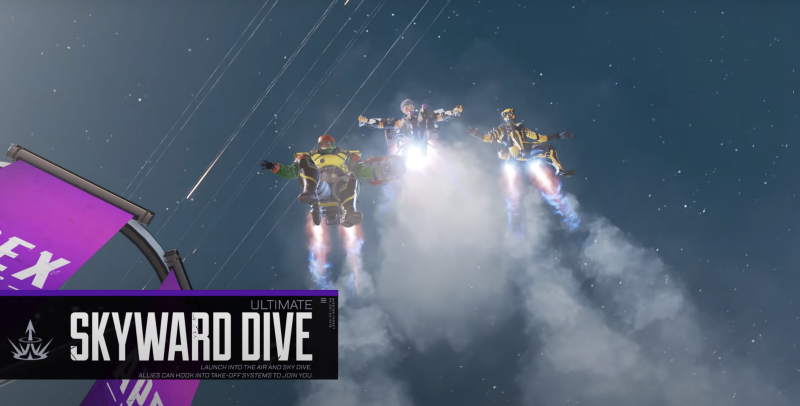 Skyward Dive can best be utilized to travel to the safe zone of the map or engage on unsuspecting enemies. Image source: Respawn Entertainment

When activating Valkyrie’s Ultimate ability, Skyward Dive, she immediately enters a flight mode that allows her teammates to attach to her. After launching, Valkyrie and her attached teammates fly directly into the air ~180 meters (~50 in Arenas) then skydive back to the ground, similar to that of a Jump Tower. While flying down, enemies in the area are also highlighted.

When you plan to use Skyward Dive, make sure to communicate with your teammates by pinging, which will then be displayed in the kill feed. If Dive is canceled, you will lose 25% of the Ultimate charge and will not be able to use it immediately. Getting your teammates to you after Skyward Dive has been triggered may take a while and could leave you and your teammate vulnerable, so make sure you’re doing it in a safe area.

The best uses of Skyward Dive are for escape and travel to the safe zone. It can ensure your teammates’ safety from the impending storm and as enemies will be highlighted you should be able to pick a safe landing spot. It’s not impossible to use for engagements but not encouraged. If you choose to, make sure the enemy team is weak for you to finish.

Valkyrie doesn’t necessarily have a “perfect” legend pairing. She would do well in just about any team combination but considering her Missile Swam ability it would not make sense to team with the likes of Fuse. There are several other traversal legends as well, such as Horizon and Octane, so pairing with either of them wouldn’t fare well. There are also now five legends with the ability to scan survey beacons therefore she shouldn’t be used as a priority either.

In the Season 11 meta, Valkyrie might not be a top choice, but she’s still not a bad pick. According to Apex Legends Status, in Season 10 Ranked mode Valkyrie was the 8th picked overall with a pick rate of 5%. While she does have traversal value, there are other legends that some find more useful in a team setting. She is definitely viable in battle royale, but is probably more useful in Arenas mode because of the smaller area of combat.