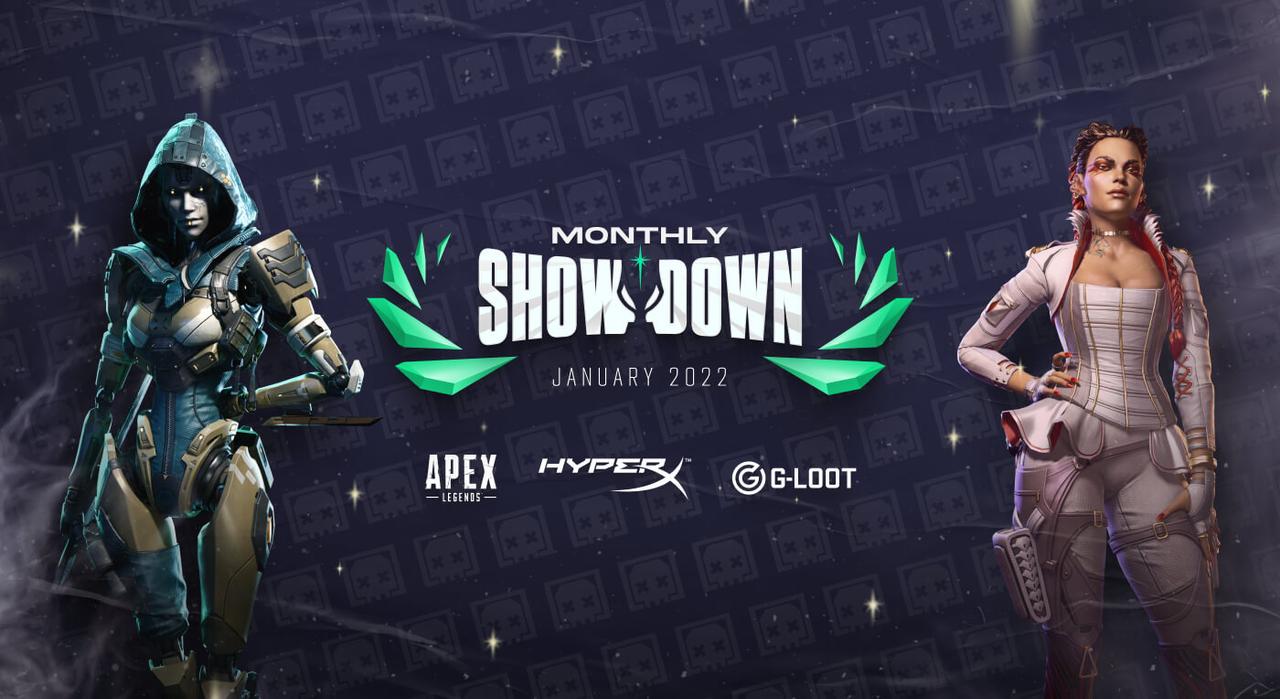 Remember how I keep saying you can win real prizes on G-Loot? This is where it happens. G-Loot’s monthly showdowns are where you will find formidable opponents to test your skills against and win real money prizes from a total pool of $5000 to prove you’re the Apex Predator.

Greetings, Legends! G-Loot’s Apex Legends January Showdown just wrapped up, and what a show it was. Lots of great players fought through weekly brawls to win their tickets into the Showdown and finally clashed on this culmination of their efforts.

The first round was played in three groups—playing six matches each—all fighting for a place in the final round. No matter how well you think you know the game, it turned out that it was quite difficult to predict the winner of the tournament from the first-round standings. It was a tough fight for everyone and not without a few twists.

The standings in both first and final rounds are decided by the total score in that round, which is the total of points from total kills and placement in each match.

Here are the first-round standings of the teams who qualified for the final round:

As the leaderboards show, Group 3 had the biggest and toughest clash between the top teams, with the top four teams having one total score difference each. Meanwhile, VCTRY Esports and Phoenix Legacy dominated their groups in terms of total kills and total score. All of these were about to change in the final round, though.

The final round was played on Jan 30, and it was an adrenaline-inducing series of matches thanks to the great work of our guest commentators, Matrym and Porosaurus. The final round saw a domination by Alliance who—in a show of power—managed to win 3 of the 6 matches. ANC OUTPLAYED, GMT, and Yung Money Guild each won one match, gathering a substantial number of points.

In the thrilling final stretch, ANC OUTPLAYED managed to win the last game with Yung Money Guild in second place. However, the total kill count and placement points Alliance gathered through the six matches were more than enough for them to grab the overall victory in the January Showdown. With a staggering total of 44 kills and an insane total score of 97, Alliance won the first-place prize of $1785. Their closest competitor Yung Money Guild managed to win the second-place prize of $1110 with a total score of 66, and ZETA DIVISION came 3rd with a total score of 54 to win $690.

As all matches were played on World’s Edge, some teams were unlucky enough to face the lava pits in a lot of matches. Especially during the final round, almost every match ended around a big lava pit, forcing teams to fight each other while watching out to not cook themselves to death. World’s Edge is known to have some hot drop zones, which most of the teams smartly avoided to have some solid footing before engaging anyone. At the end of the day, though, aggressively pushing teams created the most engaging and exciting games to watch.

Here are the final standings of the teams with their money prizes:

Beating the hordes of opponents, Alliance managed to win G-Loot’s Apex Legends January Showdown. Big congrats and a huge GG from us here at G-Loot to the Alliance team members Hakis, Yuki, and Vaifs.

You can watch G-Loot’s Apex Legends January Showdown in its entirety on Twitch and feel the excitement coupled with amazing commentary by Matrym and Porosaurus.

Monthly Showdowns happen, well, monthly. So remember to join Weekly Brawls and earn your ticket to the Monthly Showdowns! It’s always great to be rewarded for your efforts. G-Loot is here to keep track of your gameplay stats to help you improve yourself, so you can aim for the next big Showdown to win some real prizes!

See you in the next Showdown, Legends.