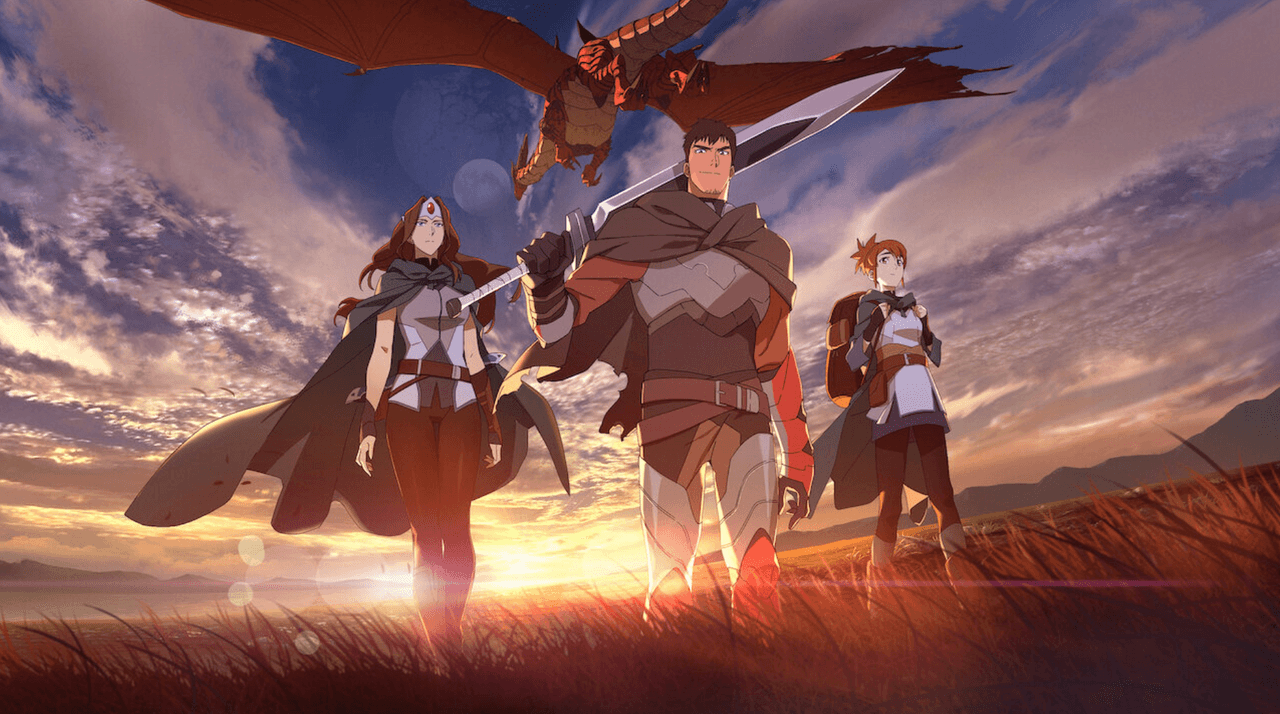 Relive The Anime – How To Play The Dota: Dragon’s Blood Characters Pt.1

Rain hellfire from above as Davion, or support your allies with long-ranged stuns as the Priestess of the Moon – here is a guide on how you can play the Netflix adaptation’s characters in Dota 2.

Valve’s long-running and highly popular MOBA Dota 2 got an influx of brand-new players earlier this year when an animated Netflix adaptation came out. The eight episodes featured a storyline from the in-game universe and were generally well-received by critics and audiences alike. Despite this, there is one big disconnect between the animated series and the video game. While Dota: Dragon’s Blood is easy to digest and relatively simple to comprehend,  Dota 2, on the other hand, can be a bit daunting at times, especially if it’s your first time playing a MOBA title.

With that in mind, here is a guide on some featured Dota 2 characters that made appearances within the animated series. These characters vary in terms of overall difficulty in the actual game. However, there’s always a place to start for players willing to learn, even more so in a game as rich and complex as Dota 2.

Starting with the most popular and semi-titular character for the Netflix series, Davion the Dragon Knight is a tanky character with very decent laning prowess. In terms of his overall popularity within the Dota 2 community, he is amongst the highest priority when it comes to picks in the drafting phase. This is due to his incredible utility in his kit, high game impact as soon as he hits level 6, strong laning presence, overall hardiness, and excellent scaling throughout all stages of the game.

Davion is also an amazing first hero for players looking to start out in Dota 2, as his kit is relatively simple and easier to understand. He has a wave-clearing ability, a powerful single-target stun, a passive ability that can keep him in the lane for longer, and a fantastic ultimate that’s great for pushing towers. Basically, if you’re looking for the easiest hero to learn from the animated series, then it would be the Dragon Knight.

Depending on your line-up and team composition, Davion can be played in two distinct lanes: he can be picked as the off-laner, who will go top if you’re in the Radiant side or bottom if you’re in the Dire side. Alternatively, he can also go in the middle lane to soak up solo experience. The more beginner-friendly option is to go in the off-lane, as the middle lane can be a bit harder to manage if you’re new to the game. In terms of your role within the team, however, both are essentially the same for the Dragon Knight; you are a utility-based core necessary to push towers and stunning the most high-value targets in the enemy team.

In terms of skill-building, you will want to always skill your second skill, Dragon Tail. This is Davion’s best form of utility, as it’s a reliable source of disable on a decently short cooldown. A single point in this is enough, and it’s usually leveled max last. Your next skill to get at level 2 can be either Breathe Fire or Dragon Blood. The former is his first skill and is a great tool for harassing or last-hitting creeps in the lane. The attack damage debuff is also great for messing up the enemy’s last-hitting timing. That said, the mana cost on Breathe Fire is a little high, so it’s not as spammable, and you always want enough mana for Dragon Tail in case of emergencies.

His third skill, Dragon Blood, is a passive ability that improves Davion’s health regeneration and armor. It is very useful in aggressive lanes where you need to spar with the enemies instead of focusing on the farm. It also allows Davion to survive the laning stage without spending too much on consumable items, and for that reason, this skill is usually the priority to max first.

His ultimate skill, Elder Dragon Form, is probably the best known because of its implications in the Netflix adaptation. This skill transforms Davion into a powerful elder dragon, making his melee attacks ranged and giving them new properties, as well as increasing Dragon Tail’s range. The dragon you transform to varies from level to level, and it’s vital to level this skill when you can, thanks to the value you can get from it. At level 6 and with enough points in Dragon Blood, Davion can take down a tower with relative ease, which is why he has such a strong power spike once he gets his ultimate.

Magic Wand is also a must-have on all characters once the mid-game hits. Aghanim’s Scepter is your first luxury item to consider after Black King Bar, as it improves Davion’s Elder Dragon Form by a fair bit. You might also consider Assault Cuirass if nobody else in your team picks it, as it gives a significant amount of attack speed and armor. Alternatively, look at Heaven’s Halberd if you need status resistance, evasion, and the ability to disarm an enemy core for a few seconds.

Mirana, Princess of the Moon

Davion’s partner in his quest for most of the series is Mirana, the Princess of the Moon. Mirana is another very popular character within the Dota 2 community. As a very versatile hero that can fit into most team compositions, she sees competitive play regularly. Her popularity and pick rate can be attributed to her amazing kit, which includes a powerful long-ranged stun (that does need some practice), excellent mobility, and an ultimate that can set up for team fights or allow her allies to escape.

Mirana can be a bit harder to play as a beginner in terms of difficulty as her main skill is skill-based and not character-pointed. However, that does not mean that she’s unplayable if you’re just starting out, as with time and practice, you can hit those mid-ranged stuns to set up ganks for your team. She’s also one of the few heroes that do not need many items to be very effective, making her a cost-efficient choice for those who want to make an impact without worrying about last-hitting and farming.

Although Mirana can be played in the mid-lane effectively, she shines the best in the position 4 role as soft support, who will be joining the off-laner in the top if they’re on the Radiant side and bottom if they’re on the Dire side. Your role in the laning phase is to support the off-lane and mid-lane cores; you harass the enemy safe-laners and deny creeps to keep their farm down, and you can also set up ganks in the mid-lane to alleviate pressure on your mid-laner.

Your first skill to take will almost always be Sacred Arrow, Mirana’s signature spell and the hardest one to master in her kit. Sacred Arrow is a single-target stun that increases in duration and damage the farther the arrow travels. When starting out, it’s all right to try and aim for short-ranged arrows that can still deal damage, as those are easier to land than spotting a full-ranged one. Most players will also just skill Sacred Arrow once and leave it last for maxing, as the short-ranged stuns are usually enough to secure kills under the right conditions.

After Arrow, you can take either Starstorm or Leap, depending on your lane and what you plan to do next. Starstorm is a great harassment tool to follow up your Sacred Arrow, as it calls down a wave of meteors to damage nearby enemies. Leap is a great utility skill, giving Mirana three charges to use that can be allotted for escaping, setting up ganks, or just moving faster through the map. Leap opens up Mirana’s amazing ganking kit exceptionally well, and experienced players will take it most of the time at level 2 to set up for something in the mid-lane.

Her ultimate skill, Moonlight Shadow, is very underrated and can quickly turn the tides of battle. It essentially turns every one of your allies invisible (regardless of where they are on the map) while giving them bonus movement speed. Mirana can use Moonlight Shadow in various ways, like setting up for team fights, helping allies escape, or securing valuable objectives like Roshan or towers. Moonlight Shadow is worth leveling every time you can, as additional levels decrease the cooldown time and increase the bonus movement speed.

Magic Wand is also a must-have for supports, so be sure to have one completed by mid-game. Rod of Atos is also a great item to consider if nobody in the enemy team can dispel it consistently. This can also allow Mirana to transform into a semi-carry role of sorts by transforming it into Gleipnir later down the line. Thanks to her mobility, Mirana is also a prime carrier of the Gem of True Sight, which is invaluable for scouting out enemy wards or invisible enemies themselves. Finally, as a support character, you will also need to keep a steady supply of Observer Wards and Sentry Wards to keep your team’s vision game in check.

Ready to give these characters a try? Join us on Discord and let us know how it goes! And if you want to know more about playing the Dota: Dragon’s Blood Characters, don’t forget to keep your eyes peeled for part 2, coming soon.

Wandering wordsmith. Video game enthusiast across many genres. If I managed to get out of the gacha rabbit hole, then so can you.