League of Legends Jhin, the Virtuoso - Why the master of “four” is the current best marksman 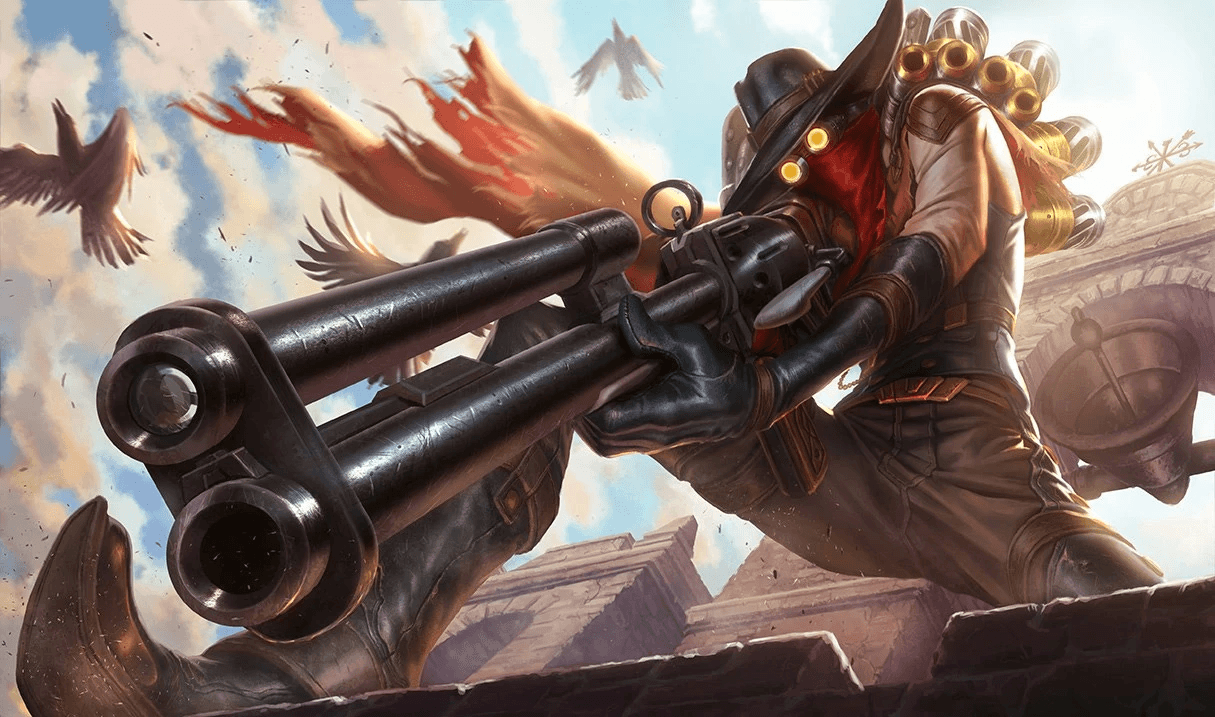 Jhin, the Virtuoso, is one of the current best Marksman champions in League of Legends. While the champion maintained prominence throughout most of the season, the patch 12.10 durability update of League of Legends benefited Jhin more than almost any other champion.

Jhin’s role in a League of Legends team is primarily as a consistent source of damage. Utilizing the extraordinary range helps immensely when playing out teamfights as Jhin, even for lower-ranked players.

Let’s look at how Jhin works and how you can quickly pick up the champion to take control of the bot lane.

Skills Breakdown for Jhin, the Virtuoso

Jhin’s passive - Whisper changes his basic attacks to fire at a static rate regardless of Jhin’s attack speed. Like Graves, Jhin has limitations on his auto attacks, as he runs out of “ammo.” Whisper stores up to four bullets, requiring a short while to reload. As a trade-off to the restriction on how often Jhin can attack, the bullets you fire deal significantly more damage than your usual basic attacks. The fourth shot deals roughly twice as much due to guaranteeing a critical strike.

Aside from the guaranteed critical strikes, Jhin improves his damage in several ways; first, he has a significant amount of scaling with attack damage on his attacks and spells. Secondly, Jhin also converts all attack speed into additional attack damage, as he cannot speed up the rate of his auto-attacks. And last, Jhin gains a scaling movement speed buff upon critically striking an enemy, improving repositioning speed.

Q - Dancing Grenade is an incredibly useful and simple tool. Jhin targets a minion or champion with Dancing Grenade, causing the grenade to bounce to (up to) four targets, dealing increased damage for each target Dancing Grenade kills. The spell is immensely useful to fill the time when Jhin reloads his gun or to aid in poke or last-hitting during the laning phase.

W - Deadly Flourish is an equally simple tool to Jhin’s strength during the laning phase. Deadly Flourish has multiple uses, ranging from simple poke on champions far away or trying to recall to protecting Jhin from enemies by snaring them. Remember that Jhin or an ally must damage the enemy champion before the snare effect activates. In addition, upon successfully snaring an enemy, Jhin gains a brief movement speed increase to catch up to or avoid enemy champions.

E - Captive Audience is quite possibly one of the toughest aspects of Jhin’s kit to learn, aside from Jhin’s Whisper passive. Using Captive Audience allows Jhin to place traps at a short distance that slow down and damage enemies caught in the explosion. Since the range is very short, one of the common uses of Captive Audience is to weaken enemy minions during the laning phase, which more experienced Jhin players can use alongside Dancing Grenade for fast clearing or with Deadly Flourish to catch the enemy off-guard.

R - Curtain Call, while straightforward in theory, leaves inexperienced Jhin players open to a lot of trouble. The ability allows Jhin to see and shoot four bullets, similar to Whisper, dealing damage and slowing enemies you hit. The downside is that using Curtain Call reveals your location, as the visuals of Curtain Call are easy to trace by your enemies. As such, positioning is incredibly important to a successful Curtain Call, with any mistake possibly having disastrous results for your team if you get caught out by the enemy assassins.

While the projectiles fired by Curtain Call travel fast, you need a certain amount of predicting your opponent’s movement to land them from a distance. Something that divides the good from the great Jhin players is their ability to slow down and hold Curtain Call during fights for the right opportunity. By simply having Curtain Call active, your opponents have to respect the danger, often resulting in lost time and damage.

In League of Legends, there aren’t many Mythic choices for Marksman champions. The choice is often between Kraken Slayer or Galeforce, as the other AD Mythic “Immortal Shieldbow” is almost always useless unless you make big mistakes. We don’t rely on getting our auto-attacks like champions such as Jinx or Aphelios. As such, we just don’t have much use for an item like Kraken Slayer.

That leaves the most popular choice, Galeforce. While Galeforce is our only real option, it fits everything Jhin wants from an item. Galeforce provides a lot of stats, extra mobility, and an additional way of dealing damage to our opponents. Previously, ahead of the patch 12.10 durability increase, some players chose to build a more lethality-oriented version of Jhin instead, which is now seldom worthwhile due to the increase of health and armor across all champions.

The common item choices for Jhin in the bot lane

Aside from the Galeforce Mythic, there are three items that Jhin builds. The most common item is Rapid Firecannon, as the extra range is immensely potent for Jhin to allow for poking enemy champions or structures. Rapid Firecannon is followed closely in popularity by the two armor-reduction items of The Collector and Lord Dominik’s Regards. While The Collector is still a commonly built item, it is far weaker than in previous patches, as all champions now have more access to armor and health. Because of that, Lord Dominik’s Regards should be a more popular choice depending on what enemies you are trying to take out.

There are still situations where The Collector is worthwhile, especially when the enemy team has no defined front line. For example, suppose the enemies don’t play a dedicated tank champion in the top or jungle positions. In that case, you don’t get the same benefit from the increased damage against high-health champions Lord Dominik’s Regards would otherwise provide.

Jhin near-exclusively uses the Boots of Swiftness due to the importance of positioning and repositioning during all phases of the game. However, Jhin may choose to use Plated Steelcaps instead in some cases. A common situation is against champions like Jax or Irelia. These champions can quickly reach Jhin in the backline and heavily rely on basic attacks, which is often a death sentence without the defenses of Plated Steelcaps.

Throughout the research I did for the article, I saw some Jhin players use Mercury Threads, so while uncommon, it warrants an explanation of why you should (almost) never buy these. The moment you get “enough” value from the tenacity or magic resistance these boots provide, you (and your team) have already made several huge mistakes that you instead can learn to prevent. When you get stunned with any consistency in teamfights, you are (probably) playing too far forward. In situations where the enemy mages can reach you, your team probably messed something up big time. As such, try and learn how to prevent these situations by assisting your team in warding or trying out different positioning during teamfights.

The starting item options for Jhin are quite interesting as there are three very popular choices, each with its up-and-downsides. The two popular starting choices for bot lane champions (AD) are the Doran’s Blade with one potion or the Long Sword with three potions. The strengths and weaknesses of the two traditional options are clear. Long Sword and potions against lanes where you expect to be fighting a lot. Doran’s Blade and a potion when you are against short-range champions, and some melee supports.

However, Jhin is currently the only marksman champion that starts boots with four potions instead to survive the laning phase better. The strategy is successful due to Jhin’s immensely high base AD stats and usage of two Adaptive Force runes rather than the more common Attack Speed option. The additional adaptive force matters to keep the consistency of last-hitting minions during the laning phase.

There are two popular rune setups for Jhin, both having equal success and popularity overall. The first is slightly more defensive, utilizing a Primary Precision with Fleet Footwork, Presence of Mind, Legend: Bloodline, and Coup de Grace. It is commonly paired with Secondary Inspiration with Biscuit Delivery and Time Warp Tonic or Secondary Sorcery with Absolute Focus or Celerity (movement speed increase) alongside Gathering Storm.

The other popular rune setup focuses on a Primary Domination path, with Dark Harvest, Taste of Blood, Eyeball Collection, and Treasure Hunter. Alongside the Precision Secondary Presence of Mind and Legend: Bloodline. Or, less common, Secondary Inspiration with Biscuit Delivery and Time Warp Tonic. With secondary Inspiration for Jhin’s popular setups, using Doran’s Blade as a starting purchase is out of the question.

One of Jhin’s main strengths in the current meta (for the solo queue environment) is its ability to fit into almost any team composition. You can play Jhin as one of your main sources of damage or as a weak-side bot lane champion alongside a roaming bot laner. Due to Jhin’s long-range and wave-clearing tools, he is one of the strongest defensive marksmen available.

Overall, Jhin struggles in certain matchups, especially against bot-duos with large amounts of poke. For example, Jhin’s worst overall matchup is against “fasting” Senna. In this strategy, Senna effectively plays the support role for the first half of the game alongside a traditional support champion that thrives with a low economy like Tahm Kench or Seraphine, that tries to collect as many minions as possible during the laning portion of the game. Senna utilizes her long-range and in-lane healing to make trading impossible for the enemies.

To make it simple, Jhin struggles with forced trading if the enemy is engaging first. Due to the limited number of attacks Jhin can fire back before “reloading,” there are just many windows that make Jhin weak during portions of the laning phase. Properly balancing the risks and strengths of Jhin takes time, but with how little the bot lane meta changes, it is certainly worthwhile if you are looking to improve.

As a final note, Jhin is a phenomenal champion to improve your overall positioning in a game, even for players who don’t often play the marksman position. With every mistake getting punished, you quickly improve at recognizing the enemy’s capabilities, which you can transition to all other roles in League of Legends.

Test your new knowledge and strategies with G-Loot by tracking your stats as you play, and earn rewards just by playing League of Legends.