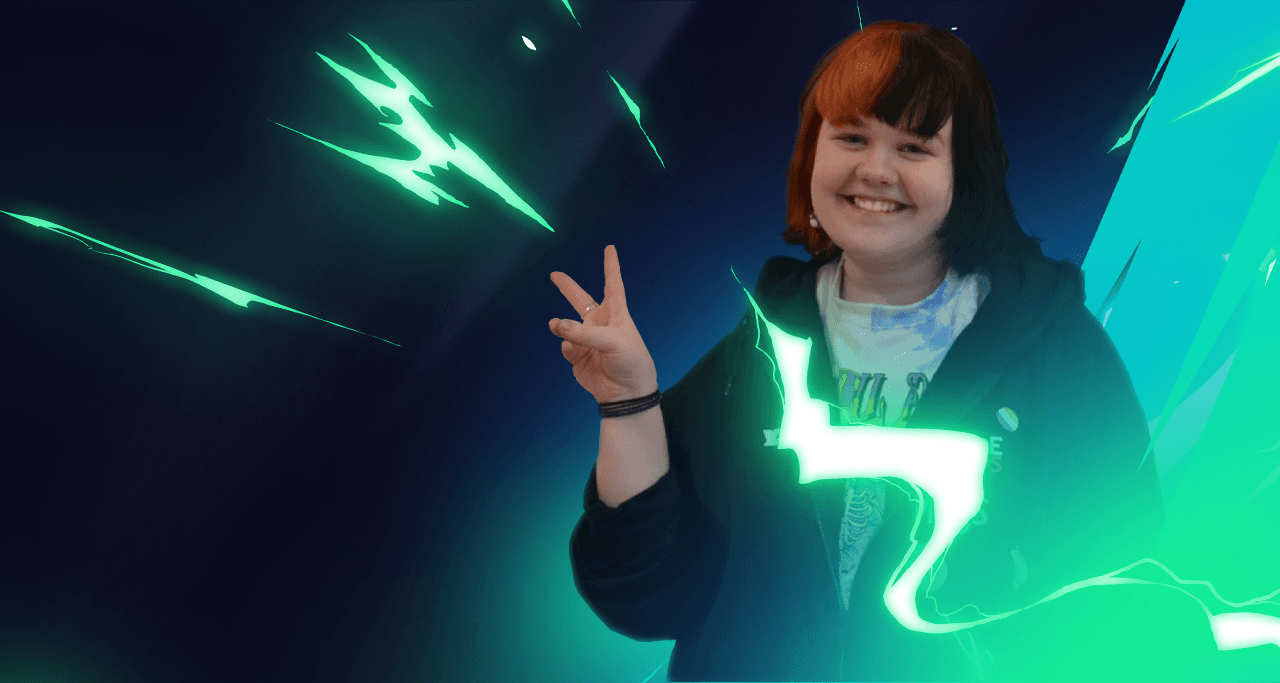 What kinds of challenges are women and non-binary people facing in esports today, and what can be done about it? We were lucky enough to be able to speak with Magda "Mags" Hyttsten, the president of Female Legends, who shared their thoughts with us.

Reader information: this interview touches briefly on topics that may be distressing, including suicide.

Thanks so much for speaking with us. To begin, can you tell us a bit about yourself?

I'm Mags or Magda, I usually go by Mags. I use they/them pronouns. I live in Gothenburg, Sweden. I've been president of Female Legends for four months now. It's been really great.

I started gaming when I was 6 years old, I think. I mainly played on websites back then. But after a while, I moved over to Minecraft. It was really thanks to my brothers. They had been playing so much, and I was just sitting in the background. My brother played World of Warcraft, and I was like, "[in a child's voice] Can I make a character please?" So it's really thanks to them. They've really been pushing and supporting me.

Later I moved over to League of Legends and started playing in teams and coaching.

How did you get involved with Female Legends?

I saw a Facebook post back in 2017 or 2018. Actually, I just realized I've been with Female Legends for 5 years now. I started out as a student going to coaching. I was a student there for 3 semesters or maybe 4. Then I moved up to be a coach. Then I took on a bit more responsibility, became head coach, and then became president this year.

That's fun that you've been through the whole process.

Yeah. I got brought up by this group in a way. I'm only 20. I was 15 when I joined. My whole young adult years. I've been really grateful to have this supportive community and missing out on a lot of the negative and sexist comments in other parts of gaming.

What is Female Legends exactly?

Female Legends is a community for women and non-binary people in esports and gaming. We started in 2017 and thanks to Liza Lind and Lillie Klefelt. They were coaching and saw that women really weren't taking part in the competitions at the time. They wanted to support them. It really blew up. They weren't ready for it to become so big.

I think it was just the Facebook group in the beginning, but then they decided to make it an organization. They started the project, The E-sports of the Future, or Framtidens E-sport as it's called in Swedish. They created a book that was released in Swedish half a year ago called "Gå tillbaka till köket - varför finns det inga tjejer i e-sport?" or "Go back to the kitchen - why aren't there any women in esports?"

What kinds of activities do you offer?

We have coaching. We have boot camps, both digital and (pre-Covid) physical. We have LANs and gaming nights. We're often at DreamHack giving talks and panels, for example. Pretty much anything we can do. Mostly right now, we're known for our camps and our LANs and game nights.

What's been your favorite moment at Female Legends so far?

I think it's mostly been realizing how lucky I've been to find this community so early in my gaming life. It's wrong to call it "missing out" on sexism, but that is what it feels like. Hearing about how many women and non-binary people still have problems in friend groups with a lot of guys, still having to fight to have their presence. I've been so lucky to have been able to pick and choose my gaming friends. Before I joined, I couldn't really choose who to game with; I would just be lucky to be part of anyone's group. It's really nice not to have that anymore. I'm comfortable with my friends. I don't have to deal with sexism in my friend group.

Why do you think diversity is so important in gaming culture?

You always need diversity. You miss out on a lot of perspectives if you only have one group. People think of esports as "masculine gaming" games like COD and Dota, not the more "traditionally feminine" games like Stardew Valley. But then people miss out on the fact that it's not just girls who play Stardew Valley; there are guys who play it and really enjoy it. We miss out on these more "feminine" games if we only develop for "masculine" people and don't have those perspectives. Representation is always needed in every aspect of life.

What kinds of challenges do women and non-binary people face in esports and gaming today?

In League of Legends, for LEC, we have two or three people, and they often sit in the supporting roles. Doing interviews after a game, for example. Not casting the game or really doing the "game parts" of it all, if you can call it that.

I had a role model when I was younger, Remilia (Maria Creveling). She was a trans woman. She wasn't in the highest leagues, but she was in the middle. She committed suicide because of the hate she got. There were these gaming houses where all the team lived and it became such a big problem to have a woman there. Or that's what they said. So they denied her many opportunities like that. It was so sad to hear that she passed away because of all the hate she got.

What could esports teams and organizations be doing to help with the problems we're seeing?

Just really trying to support and find people who can be a part of the bigger leagues and represent them properly. Saying when they've hired women or non-binary or any non-cis white man but not using them to check off every box with that one person. It's kind of suspicious when they hire a black disabled woman who they use to check off every box. Yes, of course, those people exist in gaming but don't force that person to be the only example of how inclusive you are.

It's also important not to treat these things as a joke. There was a joke from some esports organization that said something like, "Oh! We're starting an all-female team." And I thought, "that's great, how nice!" And then it came out that no, it was only Photoshopped. This is taking what we've been working towards for a long time and just using it as a joke. You can't hit down when you're trying to make these kinds of "edgy" jokes. You have to hit up. Hating on the women in the group when they're already a minority? That can't work.

You've been gaming your entire life, and you've been with Female Legends for 5 years. Do you see any changes in the industry?

Yeah, I feel like there have been some changes. But since Female Legends is quite unique and has its own community, it could be I have some distance from some of the problems. Keeping myself inside a bubble. But I'd like to think that it's getting better. For example, we're starting to see representation in casters, but there still needs to be more. There isn't much LGBTQ representation, for example. I'd definitely say it's gotten better, but there's still a long way to fight, of course.

I want to set a high mark, but I don't feel I can do that. Really getting every tournament or casting team so that it's more normal that there's a woman. Maybe not 50/50 but at least a third of the people are women or otherwise more inclusive.

I'd also really hope to see at least one girl or woman in the major leagues. It sounds so wrong to say, "I just want to see one girl!" It feels so wrong, but it's all I can hope and strive for. 50/50 would take forever, but just one girl in some kind of major event would be really nice.

There are probably women and non-binary people in those positions but not in my field, the games I am in. That's a problem as well when you say, "Oh, there are no women in the bigger leagues," and people say, "Well, there's actually one person over in that game!" Sure. I understand, but I'm looking at these games. There are a hundred more games! Please!

It's bad enough asking someone to be the representative for their gender in a single game. Let alone all games!

I think that's a problem. When you do get an opportunity to be in the big leagues, it must be so hard because you have to be that representative. Having that baggage to carry must be really harsh. There's a lot of pressure. It's not just saying yes to the deal.

If people wanted to get involved in Female Legends, how can they do that?

We have a website, femalelegends.com, that you can go to and see all of our social media. We have a membership you can join, so you get a newsletter every month. You can start there. We also have a Discord that we're trying to make really active right now, and we have game nights there every few weeks.

What advice would you give to people who want to start their own organization or safe gaming space?

That's a hard question... Just start it. There's no better place and time than now. Especially now when Covid is hopefully starting to go away, and physical events become part of our lives again.

We have done a lot of groundwork, and we have our book, which you'll be able to read in English soon.

Just start it. There's going to be backlash at first, but you're going to get more members as time goes on. You'll be a bigger group. Slowly it will turn into a better world, I hope!

If you know an organization that is working to improve esports, let us know via Discord.