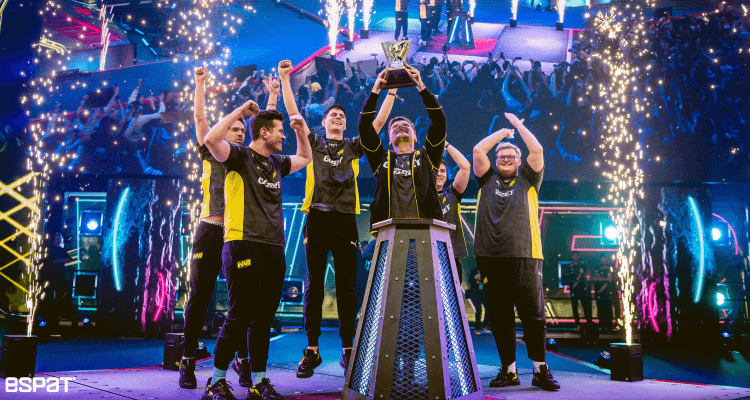 Natus Vincere cement their legacy with the PGL Major Stockholm

There is no debate today that the world’s premier team in Counter-Strike: Global Offensive is Natus Vincere or NaVi for short.

The Ukrainian esports organization has enjoyed unparalleled success over the past year and sits firmly atop the global CS:GO mountain. The squad has lifted numerous trophies in 2021, earning them more than $3 million in prize money. Oleksander “s1mple” Kolysiev, who leads the team, is arguably the world’s best player. In fact, NaVi is as close as there is to a superteam in CS:GO right now. They capped off their incredible year in early November by winning the PGL Major Stockholm, the first CS:GO Major Championship in over two years.

Natus Vincere was founded in late 2009 by Aleksandr “ZeroGravity” Kokhanovskyi. The team name is derived from Latin, meaning “born to win.” It would not take long for NaVi to live up to that title as they found success early on. In March 2010, after just four months of existence, they won Intel Extreme Masters IV in a shocking upset over Fnatic. Then in July, they took first place at Electronic Sports World Cup 2010. NaVi proved they were no fluke in October when they were victorious at World Cyber Games 2010. In doing so, NaVi became the first and only team to win three Counter-Strike majors in a calendar year.

The original team fielded a roster of players all from Ukraine:

The original core players would stay together for several more years. In 2011 they won Intel Extreme Masters V again for back-to-back years. They nearly captured a three-peat in 2012, finishing second to ESC Gaming. The team began to struggle some when they switched from the original Counter-Strike to CS: GO. They failed to win a tournament during the first year of the game’s release. In 2013, NaVi experienced roster shakeup for the first time. Original members markleoff and ceh9 departed the team, and Edward briefly left before returning later in the year. The team replaced their lost talent by signing their first international players, Denis “seized” Kostin (Russia) and Ladislav “GuardiaN” Kovacs (Slovakia).

The roster moves proved to be beneficial, as NaVi won its first CS:GO major in May 2014. However, after winning StarLadder StarSeries IX, they encountered another year-long slump. In early 2015, team leader starix retired from playing for the team and instead assumed the role of coach/manager. In response, NaVi picked up an 18-year-old stand-in by the name of Egor “flamie” Vasilyev. A month later, he was given a permanent roster spot two days before the start of the ESL Pro League Winter 2014-2015. The young Russian star would answer the call to help NaVi take first place at the event for their first major win in nearly a year. The emergence of flamie, along with arguably the biggest acquisition in CS:GO history, ushered in the new age for Natus Vincere.

Changing of the Guard

In August 2016, NaVi signed s1mple from Team Liquid in a blockbuster move. In doing so, they moved original core member Zeus to their bench. It didn’t take long for s1mple’s impact to show, as the team won ESL One: New York 2016 just two months after his arrival. Shortly afterward, Zeus was picked up by Gambit Esports. NaVi would actually struggle the following year, prompting more roster changes. Manager Starix departed after eight years with the organization, and GuardiaN was transferred to FaZe Clan. Zeus eventually returned to the team with new coach Mykhailo Oleksiiovych “kane” Blahin, also coming in from Gambit. The biggest addition would be Denis “electronic” Sharipov, who was acquired in a swap with FlipSid3 Tactics for seized. The future core of s1mple, flamie, and electronic was beginning to take shape.

In a nearly two-year span from December 2017 to April 2019, NaVi had their most successful run of success since winning three majors in 2010. They won six tournaments, including CS:GO Asia Championships 2018, Blast Pro Series: Copenhagen 2018, and StarSeries & iLeague CS:GO Season 7. In a surprising move given their success, NaVi acquired Kirill “BoombI4” Mikhaylov from Winstrike Team in 2019, loaning out Edward in the process. Zeus would retire near the end of the year, and kane would step down as well. Following Zeus’ departure, the team brought back GuardiaN as his replacement. The team’s recently appointed esports director, Andrei “B1ad3” Horodenskyi, took over as coach, a role he currently maintains. Following his loan, Edward’s contract expired, and he would not return to NaVi.

Aside from their StarSeries victory, 2019 was a forgetful year for Natus Vincere filled with heavy roster shakeup. In January 2020, the team benched GuardiaN in favor of Zeus’ long-term replacement: Ilya “Perfecto” Zalutskiy. The Russian rifler turned out to be the final piece to NaVi’s rebuild. That March, the team took first place at the Intel Extreme Masters XIV World Championship. It was their first IEM world title since winning two consecutive years in 2010 and 2011. Unfortunately for NaVi, the ensuing COVID-19 pandemic froze their momentum down for a moment. When competition moved online in 2020, NaVi was slow to adapt compared to other teams. They wouldn’t win their first online major until January 2021 at Blast Premier: Global Final 2020.

Perhaps NaVi was saving their best performance for when it counted, as the victory earned them $600,000 in prize money. This was far more than any online tournament in 2020. Coincidentally, the team’s performance in online tournaments continued to improve as prize pools increased. So far in 2021, they’ve won five online majors, including DreamHack Masters Spring 2021 and ESL Pro League Season 14. NaVi’s impressive year is not exclusive to online. In the few offline events that have returned, the team was just as strong, winning Intel Extreme Masters XVI - Cologne and Intel Grand Slam Season 3. However, in a shocking turn of events, NaVi terminated flamie’s contract and replaced him with 18-year-old Valerii “b1t” Vakhovskyi. The new-look squad would only have a few months to revamp before PGL Major Stockholm 2021, the first major championship since the start of the pandemic.

A Historic Performance at PGL Stockholm

Natus Vincere were not only dominant in Sweden; they were historically flawless. They became the first team to win a CS:GO Major Championship without losing a single map. Even more impressive is the level of competition they faced en route to the title. NaVi had no cakewalks on their way to the Grand Final, defeating five of the world’s top teams: Heroic, Virtus.pro, Ninjas in Pyjamas, Team Vitality, and Gambit Esports. They met fellow juggernaut G2 Esports for the championship in what many thought would be a close and competitive contest. NaVi won the first map on Ancient 16-11 to take a 1-0 lead, putting pressure on their opponents to respond. G2 adjusted well, forcing overtime on the second map. However, NaVi proved too tough to overcome on Nuke, winning 22-19. After more than a decade of existence and numerous first-place finishes, the team finally won their first Major Championship trophy.

Natus Vincere’s victory at PGL Major Stocholm solidifies them as one of the greatest Counter-Strike teams ever. They join the likes of Fnatic, Ninjas in Pyjamas, and Astralis in the pantheon of legends. All of these teams won numerous major tournaments over an extended time and dominated at least one calendar year of competition. Even more impressive is that NaVi found success in two eras with entirely different core rosters. They are also the second highest-earning Counter-Strike team of all time with over $7 million in prize money, trailing only Astralis.

This gold-standard team in modern CS:GO shows no signs of slowing down and has proved they can sustain success amidst substantial changes. In a matter of years, we could be calling Natus Vincere the absolute greatest team ever to play Counter-Strike.