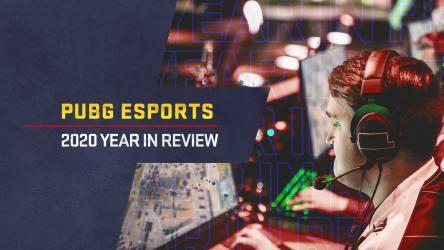 PUBG Esports was forced to adapt and embrace a new structure to pull through what’s been a challenging time for all of us. The past season still played host to the best players from around the world, producing a season chock-full of unforgettable moments.

Starting with the final offline event

As with anything in the year 2020, PUBG Esports was forced to adapt and embrace a new structure to pull through what’s been a challenging time for all of us. Despite unusual circumstances, this past season still played host to the best players from around the world, producing a unique season chock-full of unforgettable moments. During a year of uncertainty, organized events such as GLL Season 4, the PUBG Continental Series, and most recently, the DreamHack Winter Showdown, provided PUBG Esports fans with something exciting and entertaining to look forward to. Befittingly, PUBG Corp. has always referred to their player base as “survivors.” So, in a year filled with hardship, it’s been PUBG Esports’ players and fans who have come together to enjoy a season filled with online competition all around the world.

Traveling back to the final weekend of February, the GLL Season 4 Finals hosted sixteen of the best teams from around the world. Players, coaches, and supporting staff gathered in Stockholm, Sweden to put on a show as teams competed for a $150,000 USD prize pool. The field included some of the most notable teams and faces in the PUBG Esports scene, all fighting to kick their season off with a major victory while securing the lion share of the event’s prize pool in the process. The Finals demonstrated the abundance of skill and high-level competition common across every region. It was quickly apparent that the winner of the GLL Season 4 Finals would need to play their best stretch of matches if they hoped to hold off the other fifteen squads.

Of the teams arriving in Stockholm for the Season 4 Finals, few carried the same level of reputation and expectations as FaZe Clan, Team Liquid, and WTSG. In the eyes of many, these three teams came into the event as favorites, but it would have been foolish to count out any of the other proven competitors. The Finals began and the leaderboard stayed close as the best-of-eighteen began to play out. Day One of the event set the foundation for a close race between teams over the next twelve matches. Ultimately, WTSG (Welcome To South George) would be crowned champions of the GLL Season 4 Finals, convincingly following a dominant seven-match stretch that separated the team from the pack. At this point in the season, it was evident that WTSG arrived in Stockholm as the strongest team inside a lobby consisting of NA, LATAM, and EU squads. As far as LAN events are concerned, the GLL Season 4 Finals would be the first and last offline tournament for many in 2020, unofficially signaling the commencement of an entirely online competitive format for the remainder of the season.

From there, attention shifted towards PCS, the online regional series that set local rivals against one another over a three-week group stage. In North America, the PCS1 Grand Final produced one of the most unbelievable final matches we’ve witnessed in recent memory. Entering the final day of the tournament, Team Veritas (Wildcard Gaming) won three consecutive matches to catch and surpass Shoot To Kill, knocking them from the top spot with just one match to play. STK hot-dropped the now leading team and disrupted their early-game loot phase. Shoot To Kill began their warpath, taking any fights that presented themselves within earshot. The match and tournament came down to “Luke12” - who managed to find the two necessary knocks to match the point total of Wildcard Gaming. With the help of a tie-breaker via kills, Shoot To Kill was crowned PCS1 North America Champions.

The action never slowed during the PUBG Continental Series. In Europe, teams like FaZe Clan, Team Liquid, and Virtus Pro (Northern Lights) put their talents on display in one of PUBG Esports’ most competitive regions. Throughout each of the three PCS events this season, Europe became the center of several exciting tournament finales. One of the region’s most memorable moments was the FaZe Clan bridge camp to catch Team Liquid by surprise. The highlight became one of the most exciting plays to originate from the PCS3 Europe Grand Final.

Patches and updates that shifted the meta

This past year, numerous changes to the game reshaped the playstyle or “meta”, ranging from weapon preferences to how teams approach particular scenarios. Since the beginning, PUBG Esports has swiftly reacted to the game’s latest patch. Most noticeable this year, the buff to the Beryl M782. This weapon became a mainstay at the highest level of play in each region, especially when used in combination with the SLR. Since the Beryl’s buff, we’ve watched repeatedly as the weapon quickly knocks and eliminates enemy players, making it a go-to after the weapon’s recoil was reduced. Recently, the weapon has been slightly reversed to a reasonable spot, with an increase to its recoil in the latest patch.

Perhaps one of the most significant changes to the game occurred earlier this year when Frag Grenades received a couple of long-overdue nerfs. These adjustments would ultimately reshape how the game was played both casually and competitively - opening the door for more gunplay and forcing teams to engage within sight of one another. The days of hurling a grenade in the general vicinity of your enemy and landing the knock are long gone. Throughout the year we’ve seen Frag Grenade usage decline as Molotovs and Stun Grenades became a more viable option. To be fair, there may be some cause for concern when it comes to Stun Grenades, but that’s an entirely separate conversation.

The impact of an online only environment

Professional PUBG players are no strangers to competing online for substantial sums of money. While we may not have an even alternative to sitting inside an arena just across from your competitors, online tournaments have made the most of a challenging season. We’ve already witnessed a variety of incredible online PUBG Esports events with the help of GLL, DreamHack, ESL, and more. These events have kept the game’s esport moving this season while managing to elevate the excitement and anticipation that surrounds these events historically. Unfortunately, online tournaments also offer a variety of new variables and challenges for players and tournament organizers that would otherwise not be an issue offline. Latency, anti-cheat measures, general tournament production, and various other important components of a massive competitive event are now being tackled remotely. This is a credit to the incredible work being done by individuals behind-the-scenes for each of the events we’ve enjoyed this year.

Taking latency as an example, it’s primarily mentioned in regards to a fight between players, but it also influences a player’s interactions with objects in-game. Technical issues at home have also had the potential to affect players and teams. Not to mention that these events typically have a substantial prize pool hanging in the balance and a variety of challenges can stack up to impact a player who would otherwise be competing on a local system against opponents inside the same network.

The top PUBG performances of 2020

There’s been no shortage of jaw-dropping performances this season in each competitive region. While it may be impossible to recollect all of them, we can look back to a handful of well-deserving moments. In Europe, Virtus.pro (Northern Lights) began and finished their PCS campaign with a Grand Final Championship. Winners of the PUBG Charity Showdown back in May, Virtus.pro held off Team Liquid in the PCS3 Grand Final to win their second title of the season. The team has consistently put themselves towards the top of tournament leaderboards and earned the opportunity to play under a new banner heading into the new year. Despite the new color and team name, Virtus.pro will carry over all four players into next season starting with the PUBG Global Invitational.

Taking a look at the most successful teams of 2020, it’s tough not to mention North America’s back-to-back PCS Champions, the Susquehanna Soniqs. Led by the team’s All-Star fragger, “TGLTN,” the Soniqs followed up a dominant PCS2 Grand Final victory with another during the PCS3 Grand Final. This was one of the most impressive runs of any team this season, demanding the attention of fans worldwide and putting the Soniqs on everyone’s radar as they prepare for the upcoming global invitational. The big question for this team is, how will NA’s best team compare to the best PUBG teams from around the world?

Teams such as Buriram Esports United, LG Divine, and FURY delivered their fair share of exciting highlights from the APAC region throughout the PUBG Continental Series. Both LG Divine and Buriram Esports United have secured the two most recent APAC events, with FURY being one of the most consistent teams in the region. Unfortunately, FURY will be the only team from this group of three not present at the PGI.S event in South Korea - despite having a season well-deserving of an invite to PUBG Esports biggest event of the year.

Light at the end of the tunnel

Thankfully, we are beginning to see the light at the end of the tunnel for PUBG Esports in 2021. Recently, it was announced that the PUBG Global Invitational.S will host some of the best teams from around the world in Seoul, South Korea in an offline event on February 2nd, 2021. This is incredible news for fans and players who want nothing more than to see LAN events return to PUBG Esports. Keeping safety at the forefront, this event will showcase thirty-two teams over an eight-week schedule as teams compete for a piece of the initial 3.5 Million USD prize pool - with an additional 30% of the PGI.S Pick Em’ Challenge added on later.

While I and many others are incredibly excited for the PGI.S event to get started, it’s currently the only event announced for PUBG Esports in the new year. Any information regarding the 2021 Season will be greatly appreciated by players, tournament organizers, and most importantly, orgs. This has become a primary point of criticism for the league but will quickly be dropped once official plans have been announced for the new season.

From chaotic tournament victories, unbelievable comebacks, and legendary highlights that we’ll be referencing for years to come, we witnessed a collection of amazing moments throughout PUBG Esports in 2020. With an unpredictable season littered with marvelous stories behind us, we look forward to an even bigger and better season next year.