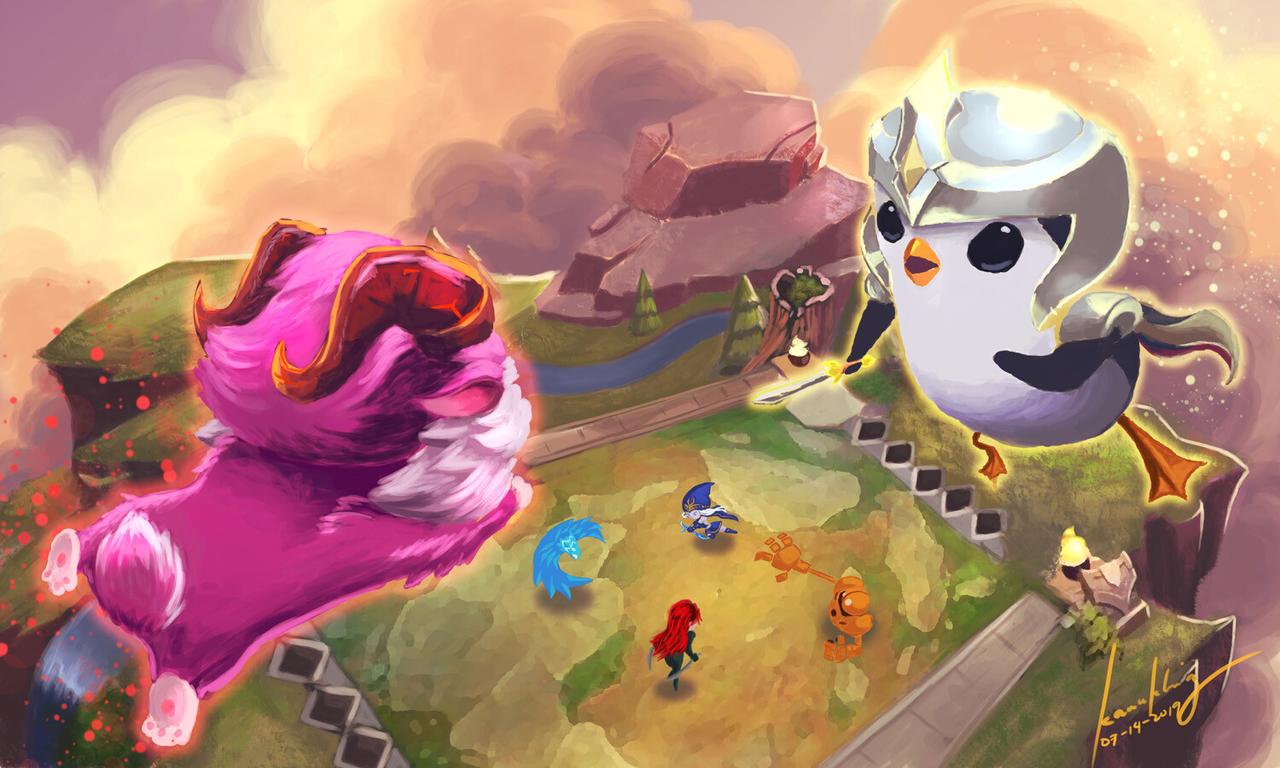 Teamfight Tactic’s mid-season set change has rolled around once more, just in time for the Sentinels of Light event. The previous theme of Ruination is getting redeemed by the light, and with this change come new units, items & traits, and a whole new way to play the premier auto-battler. In this guide, we’ll walk you through everything you need to know to transition into the new environment and rank up this season.

As always, new mechanics means saying goodbye to some of the traits and units you’ve come to know and love. This set does away with Verdant, Dragonslayer, God-King, and Coven. Not every unit with those traits is gone, though.

Verdant’s AoE crowd control immunity was a notable enabler of hyper-carry compositions revolving around Ashe & Kayle. Being able to prevent your opponent from getting early disables onto your key units, both of which wanted time to ramp up with a Guinsoo’s Rageblade, allowed both auto-attack focused carries time to scale while their frontline soaked the initial aggro. The deadly duo won’t be removed, but Taric, often the second unit enabling the trait’s benefits, won’t be sticking around for Reckoning 2. This will increase the importance of items like Quicksilver and Banshee’s Claw to protect fragile backline units in these comps.

Many players will be happy to say goodbye to Mordekaiser, after he went a bit slap-happy in Ruination. Dragonslayer’s penchant for downing high-health units won’t be a problem for players looking to beef up their frontline. Not all of them are gone, but Trundle, Pantheon, and Mordekaiser won’t be joining rosters from 11.15 onwards. This should hurt Legionnaire compositions, which often used Mordekaiser as their primary carry.

Coven’s 3-unit cabal let you hypercharge a cast-focused unit like Ryze (who will also be bidding adieu to the game this season), Kennen, or one of the Coven members in order to soup up their performance as a trade-off for the loss of 3 slots which prevents most primary trait compositions from hitting their 6-unit payoff. Riot is doing away with this playstyle, so no more crazy one-shots from this trait.

Garen sticks around, Darius takes the fall and exits the set. This was the most situational of the traits, and tended to be icing on the cake rather than the reason you build either God-King.

Fallen lost Warwick, Viktor, and Katarina. In addition, the departure of cursed items means it will shift to granting additional stats for each successful combat the unit takes part in, much like the previous trait Warlord. Abomination laid Ryze to rest, a serious carry with a blue buff and AP items. Finally, Kindred was taken out of the 5-cost slot, being replaced by the new Sentinel Ranger, Akshan at the top of the shelf.

The big new trait addition is Sentinels, a 3/6/9 unit trait that centers around the Sentinels of Light Event happening across Riot’s titles. Sentinels have a shield that grants attack speed that bounces from unit to unit as it breaks, enabling great value over longer, drawn-out fights. The Sentinel units added are: 1-Cost: Olaf, Skirmisher. Senna, Cannoneer. 2-Cost: Irelia: Legionnaire, Skirmisher. Pyke, Assassin.3-Cost: Rakan, Renewer. 4-Cost: Galio, Draconic Knight. Lucian, Cannoneer. 5-Cost: Akshan, Ranger.With a self-enabling Cannoneer package between Lucian and Senna, Sentinel-focused comps should look to save up an early economy and focus on getting to Lucian, Galio & Akshan early. Irelia can be a powerful carry but often requires her secondary traits to be activated in order to excel.

Similar to Ranger, Cannoneer is a 2/4/6 offensive trait that gives each Cannoneer’s fifth auto-attack a significant damage buff and splash damage. The Cannoneer units added in addition to Senna and Lucian are: 2-Cost: Tristana, Hellion. 3-Cost: Misfortune, Fallen. These other two Cannoneers also offer a powerful splash to give either one carry potential. Often, the Misfortune and Tristana comps can opt to avoid fighting other players for Senna and Lucian, opting to focus on the non-Sentinel gunslingers. Both of them can shred enemy teams apart with the right items. Tristana will build traditional AD items, while Misfortune excels with Spear of Shojin & Archangel’s Staff.

Gwen’s come to save the day! A 5-cost Mystic, she also has the unique trait Inanimate, which grants damage reduction to units that begin the game adjacent to her. Gwen’s a powerful capstone, enabling your frontline to tank longer, and your backline carries to survive initial burst more easily.

A sight most frightening

Fiddlesticks, the last new unit, a 4-cost Mystic/Revenant/Abomination, only solidifies Revenant’s position as a top-tier defensive package. Ivern remains an excellent disruptive unit, Volibear can solo carry games just as well as ever, and Fiddlesticks’ AoE ultimate can output silly amounts of damage and healing.

This update’s key system change is The Armory, which functions similar to the Lunar Festival orbs previous. Part-way through the game, the Sentinels’ Armory opens up, delivering a golden orb that can hold anything from Reforgers to item components to a deluge of gold. In addition, a new trophy can be received as a reward from the Armory or creep rounds that offers a selection of trait emblems, skipping the process of combining a spatula and other components. Most importantly, it introduces new uncraftable trait emblems, as well as Radiant Items: unique artifacts that are hypercharged versions of the normal items. These frankly overpowered items can change the entire dynamic of a composition and are offered in a randomized selection in the player’s store.

Here are 3 team compositions that we recommend in Dawn of Heroes’ launch patch.

Draconic is loving a slew of quality-of-life buffs heading into Dawn of Heroes. With Draconic Emblems being offered with the new rewards and Galio as a way to reach Draconic 5’s golden eggs early without having to find Heimerdinger. Getting Draconic 3 set up early in the first PvP round, with early rolls of Ashe & Zyra enabling you to snowball the free economic advantage into a powerful mid and late game. If you can complete Draconic 3 early, look to stockpile gold and leverage it into quicker levels up. Galio becomes available earlier than Heimer would in the previous season, so being the first to start picking up copies of the petricite gargoyle can slingshot your economy into overdrive.

Early game, look to secure Draconic 3 as soon as possible, each round is another egg, and the value compounds quickly. Udyr and Sett are the easiest to guarantee, with Zyra being the ideal 3-cost to find early. This comp will want Brand in the late-game, so being able to grant both Spellweaver can win you early rounds or save crucial health while loss-streaking. However, some Draconic units like Sett and Ashe can struggle to compete in the late game with the best that game has to offer, and the trait offers no benefit in combat. Ideally, this comp looks to jump ship on Draconic later on, retaining Heimerdinger and occasionally Galio in order to fill their roster with an incredibly expensive slew of champions. Brand, Nunu, and Fiddlesticks form the Abomination core, cherry-picking the best units with the trait. While you might not be playing them while developing your board, making sure to snag a 2-star Nunu where possible in the midgame will save you rolling later. Hitting level 8 early is the key breakpoint, where you can decide to sell out of Draconic or aim for the stars and try to power through to level 9. In these levels you’ll look to assemble Revenant & Invoker, polishing it off with Gwen’s powerful protective abilities. Abomination allows you yet another durable unit that avoids initial damage and can provide important disruption. Look to protect Heimer’s turret and combo your powerful AoE to wipe your opponent's squads. Final Comp: Volibear, Gwen, Ivern, Teemo/Galio, Heimerdinger, Fiddlesticks, Brand.

Of little surprise to those who played the last set, Aphelios and a 5-star Ranger make a powerful carry core on their own. This time, instead of Kindred, League’s latest addition, Akshan, more than worthily replaces her in Dawn of Heroes. This comp will often begin like a standard Redeemed comp, Vayne & Varus as the damage core with Leona and Aatrox on the frontline. Ashe can replace Vayne heading into the midgame, and Lux is an upgrade for Aatrox while you wait to be able to access 4-stars. The only early unit you’ll look to play in the end is Sejuani, who can pair with Rell for an incredibly durable frontline. Nautilus also synergizes with Leona, and grants Ironclad in combination with the iron maiden. Reaching Aphelios as soon as possible is the key element of this comp, prioritizing BF Swords on the carousel in order to give him or Akshan the raw AD they need to carry you all the way to a 1st.

Similar to the Draconic loadout discussed, and many of the comps this set, the combination of Ivern, Volibear, Fiddlesticks & Gwen is hard to rival. The key units are Aphelios and Akshan, with the Lunari gunslinger still being incredibly strong despite a partial rework. Aphelios loves Deathblade and Bloodthirster as much as before, and Akshan’s equally a fan of those items. It continues the pattern of aiming for leveling early with a powerful initial board, focusing on Redeemed & Rangers, before liquidating its early picks and turning that gold into more powerful, costly champions. Final Comp: Volibear, Gwen, Ivern, Fiddlesticks, Sejuani, Rell, Aphelios, Akshan

Tristana is the latest crazed carry for the Hellion trait. Able to sling herself across the map to squishy enemies, annihilating them with a burst of attack speed before rocketing away from enemies that have aggroed onto her with the next, hopefully after killing a unit. It’s become easier to benefit from early, with its first breakpoints dropping to 2 & 4 from 3/5. As per usual, Hellion has the unique benefit of most of its units being incredibly cheap to purchase, nearly half of the units costing 1 gold per. This comp focuses more on combining cheap early units into high-ranked juggernauts that can steamroll early win streaks against weaker comps. Teemo is pure gravy if you can get that late but focus on getting early 2-stars of Ziggs, Kled & Poppy in order to power up your Tristana. Level 4 should be just Hellions, with 5 looking to splash another gunslinger in Senna or Miss Fortune in order to give Tristana that extra oomph to power past scaling armies. Eventually, Lucian is the best enabler for Tristana if you want to opt-out of Poppy, with no good Knight splash for the comp. Tristana excels with Runaan’s Hurricane and raw attack damage, able to shred multiple squishy carries when she first sends her deep into enemy lines.

Focus on getting a strong comp early, saving what gold you can while angling to turn a strong board into extra money from consecutive wins. Kennen can be an alternate damage dealer with the latest souped-up version of Morellonomicon, his signature item. It’s crucial to prioritize Tristana’s items, as well as aiming to 3-star her around level 6. If you can hit the right pacing, you’ll save health and gold by punishing opponents who prioritize their economy. Final Comp: Teemo, Lulu, Tristana, Kennen, Kled, Poppy/Ziggs, Rell

Between the delayed power spike of The Armory’s Divine Blessing’s free items, several new powerful units on the more expensive end, and a new array of emblems, late-game comps tend to excel past their traditional counterparts. Filling out a primary trait all the way to 6 will get you a fair way, but players need to lean especially hard into 3-starring key low-cost units in order to justify not aiming for the stars and assembling an unstoppable onslaught of pricy champions. We hope you can take these strategic insights into your games and high-roll your way through the next rank up!

Duelist Cypher, Honeybadger PMC, Draconic One-Trick. Checking for typos is like clearing corners: I do it or I'll feel dumb.