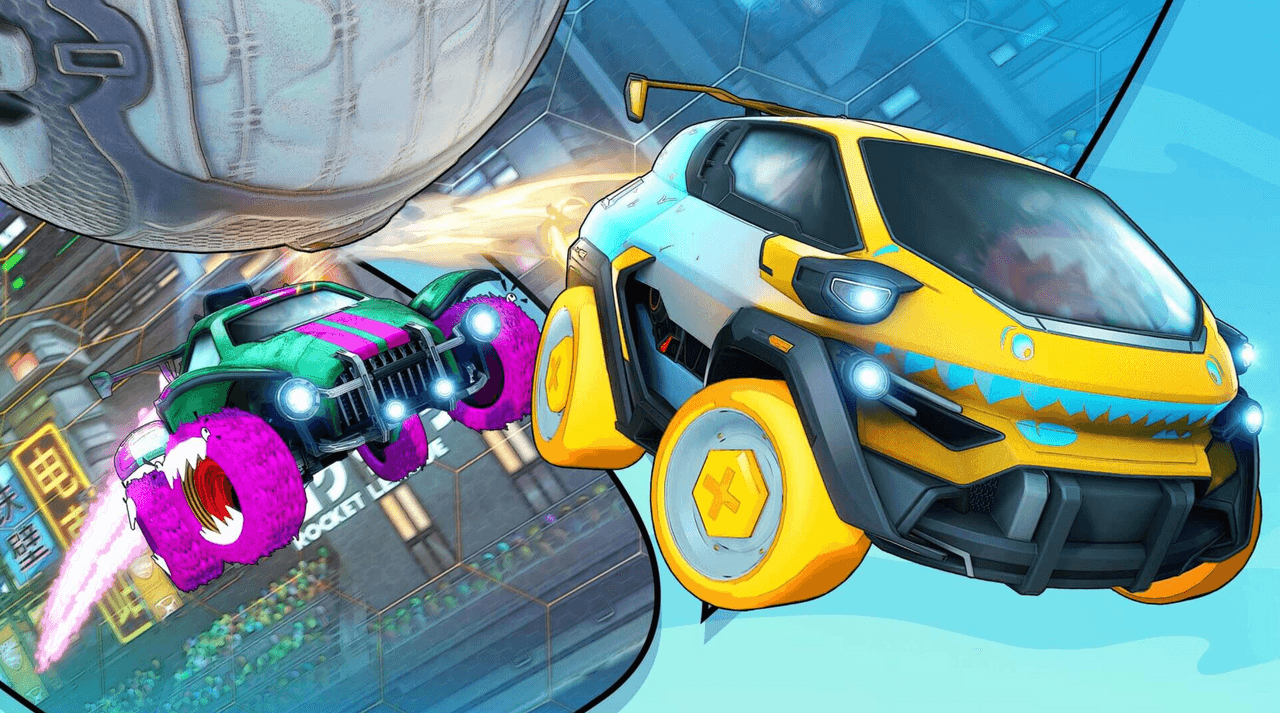 We hope you were able to hit your goals for the Season 5 rewards, but there are more important things at hand now—a Nomster invasion!

There are some new faces in town in Rocket League.

The newest Rocket Pass launched for Season 6, focusing on some cute (in a terrifying kind of way) new creatures called Nomsters. These square, chomping Nomsters are available all throughout the Rocket Pass in a variety of brand new cosmetics!

When you purchase the Premium version of the Rocket Pass, you will immediately unlock the "Nomster" Player Banner. It seems a bit angry but lends itself well to photos, don't you think? Here you can see it nearly matching my puppy's energy in my profile photo!

There are many more Nomster themed cosmetics like Avatar Borders, another Player Banner featuring the new Nomad car, and a violent new Goal Explosion where the Nomster crunches all nearby vehicles!

You can even make your own car look like a Nomster with some furry wheels. I am curious how much traction that will give you, but hey, it looks fun. The "Sunny Smiler" decal for the Nomad is another zany addition to the game. It adds a sticker to the front of your car with the hungry-looking Nomster set to help you demolish any opponents. Some seagulls flying across the landscape with a bright sun on the back half of the car is a nice addition to the visual appeal. You can go one step further with the "Nomster" Antenna to add props to your grill and headlights, truly taking on the appearance of the fuzzy monsters on the pitch!

These cute—I mean, terrifying—new monsters are sure to add some fun to your next car design. So while you are at it, why not give it a go with the new "Nomad" car design? This Premium tier reward is reminiscent of the Merc but with a sleeker design. Its chunky design fits well with the Nomster theme, letting you truly look like a threatening, furry monster as you race around the field. You can also unlock Nomad-exclusive content like the "Meteor" animated decal.

The Nomad was the star character in the trailer for the animation-themed event, featuring the "Well Traveled" decal, exclusive to the Nomad, as it chilled out during a dreamy, cartoon sunset. Several other cosmetics tie into this theme, like the "Happy Sunbeam" rewards you can earn through Tournament victories! The vicious Nomster interrupted, sending the Nomad to flee into the billboard where we get our first preview of the new map, Neo Tokyo: Comic edition.

Maps are always some of the most exciting parts of a new event as everyone gets to engage with them, Rocket Pass or no. This comic book theme is found again in the Premium rewards with the "Screentone" animated decal that brings the unmistakable graphic novel style to car design. The variety of themes in this event, from Nomsters to Comic Neon Tokyo, stick out as offering something for everyone.

A new game mode is coming to the game as well. While there is little info, the Season 6 trailer explains it as "A Smashing Mid-Season Surprise." So while it might be a while before it's added to the game, it looks to be an electric, high-flying new game mode. New ways to play the game are always enticing, and this one seems to be unique and exciting.

While the Premium Pass offers most of the rewards, the Free Pass still has some to work toward. There are several Player Titles, such as "Master Crafter" you can earn at just Tier 2. Of course, there are lots of loot boxes too!

The new season comes with new Ranked rewards, so be sure to hit your goals this season as you look forward to even more ways to spice up your garage. With the Rocket Pass, Tournament Awards, and even a new game mode coming soon, there is no shortage of new content as Season 6 gets underway!

Looking for more ways to spice up your Rocket League games? Join G-Loot for free and start completing Missions and earning rewards every day!