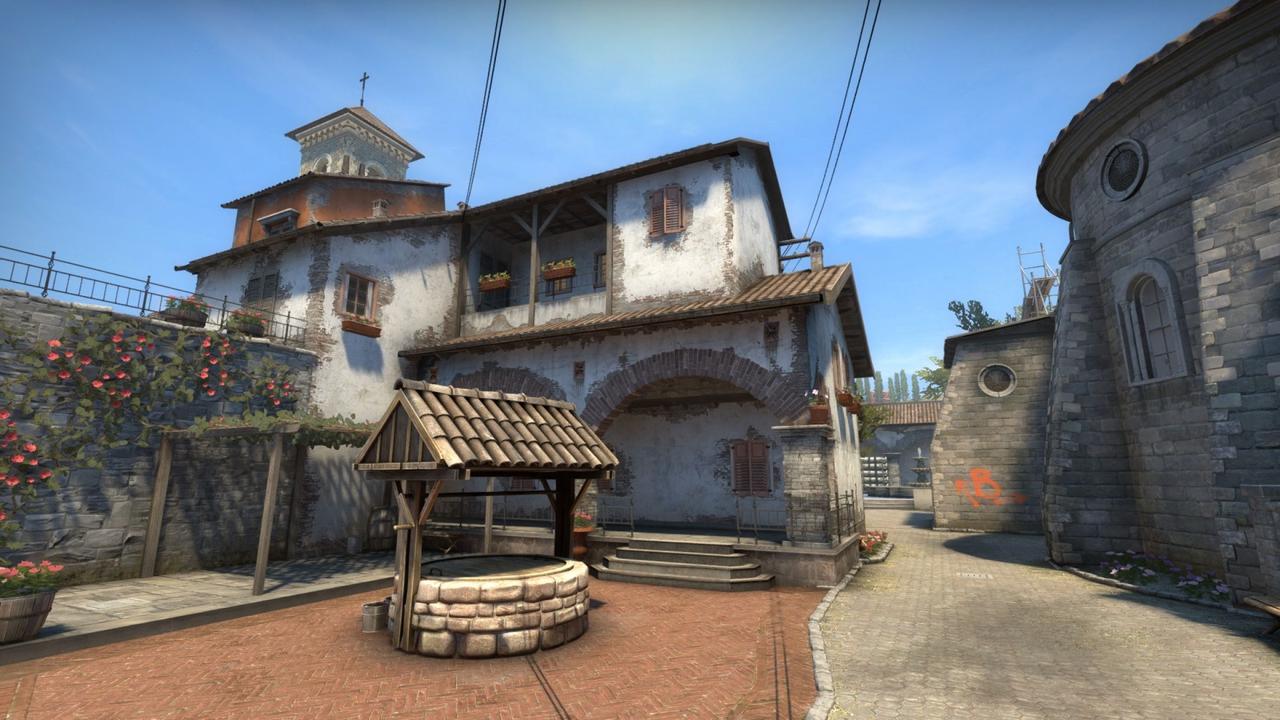 Top 5 CS:GO graffitis and the stories behind them

More than just décor, CS:GO graffiti acts as a monument to some truly epic moments in CS:GO esports.

Graffiti in the real world ranges from an incredible art medium to an annoying inconvenience. Most famous for his work with graffiti is Banksy, who’s created some powerful pieces with a stencil and a spray can. I can’t say I’m as enthused about the artwork in the underpass by my house. Talk about anatomically incorrect.

But the tagging in CS:GO is less about making the map look edgy, and more about immortalizing some incredible esports moments. So let’s countdown our top 5 CS:GO graffitis and go into the stories behind them.

Starting strong with CS:GO legend S1mple. Oleksandr Olegovich Kostyliev—or Sasha—from Ukraine, made Team Liquid proud with this play. Any of you looking to improve your play, start taking notes now.

It was the semifinals of ESL One, Cologne 2016. The pressure was on, as both Team Liquid and Fnatic are known internationally for their incredible skill. The hype when these guys play against one another is something else, and the winning team would go on to play the finals. So when S1mple was the last of Team Liquid against two Fnatic players, things were tense.

S1mple was higher up than his opponents, Dennis and KRIMS. The two v one wasn’t looking good as both his opponents had eyes on him. S1mple drops down, hitting his closest enemy—Dennis—with a perfect noscope shot. The audience goes wild. But there is still one other opponent, and he already has his shot set on S1mple.

Perhaps it was the incredible unanticipated move he’d just witnessed, or maybe the pressure of the game, but Fnatic’s KRIMS didn’t manage to take out S1mple. There was a short, tense shoot-out. After mere moments of firing, it was over. S1mple had noscoped both opponents within a few seconds of one another.

The moment was incredible to watch. With one commentator saying "what is this clutch from s1mple? What, are you serious? What is that? You can't do that, s1mple! That's not allowed! This is not FPL! This is a major!" and another, in awe, “S1mple is an assassin, this guy is absolutely unbelievable”.

Valve has since immortalized the spot where he dropped down, adding some pretty sick graffiti. It shows an angel counter-Terrorist with a scope-less AWP. Around his head is a double halo depicting a target—awesome art for an awesome play.

Unfortunately, this memorial was removed from the map, so you can no longer check it out, but that doesn’t mean the moment isn’t worth remembering.

Yet another graffiti involving the infamous Fnatic! The artwork depicted a character wielding four AWPs. “That's a lot of AWPs for one guy”—well, it serves as a memorial to a curious play from Fnatic.

The whole team, bar one, rushed out with AWPs. So four. Almost the entire team! Commentators and viewers alike were taken aback by the unusual play. Did it work? No, they managed one kill. But it goes to show, trialing new strats is what builds a team like Fnatic. Sometimes you have to step outside your comfort zone and try something new. So we may not have the graffiti to remember this play, but let’s keep the spirit of awesome new strategy alive and try something fresh ourselves the next time we play.

CS:GO is, first and foremost, a game of skill. Your aim and technical ability in the game will top almost everything else. However, a close second to sheer skill and practice is your tactics. To have a well-thought-out strategy, you have to know the game well. Like, really well.

Players like Dosia know that on Inferno, if a bomb goes off on Bombsite A and you’re in the far corner of Pit, you’ll just about survive. You’ll be left with very little health, though. Well, Gambit Esports’ very own Dosia used this little tidbit to his advantage in the ultimate strategy play.

It was the finals of PGL Major Kraków 2017. Gambit Esports vs. Immortals. The heat is on high and the AC is broken; this was a big match. Dosia saw he could not win, as Immortals’ bomb on Bombsite A was set to go off. He saw two opponents—Steel and LUCAS1—standing in the aforementioned corner, and he took the chance. He threw a grenade at them, with it going off just moments before their bomb did; they were goners. This move took out their weapons and created an unanticipated financial setback for Immortal. The setback undoubtedly contributed to the eventual victory of Gambit.

The play in question was so incredible and unexpected, it left caster Sadokist literally at a loss for words, incapable of describing what he had just witnessed.

It goes without saying that the artwork is well deserved. Added by Valve, you can now find a poster next to the corner advertising a grenade-looking perfume. The phrase is in Italian, meaning ‘No, you cannot escape now.’ A badass poster for a badass esports moment, but perhaps a less appealing perfume ad, if you ask me.

The esports community contains some of the most dedicated people you’ll ever meet. They grind their game of choice day in, day out, perfecting their play. They sacrifice everything they have to in order to better themselves and—eventually—win the tournament of their dreams. Would an esports gamer play as flames grew around them? Maybe. If we’re talking about the metaphorical flames of society, then yes, that’s called my Friday plans. If my house was actually on fire, I might be a little more reluctant to finish my Valorant game. But I guess it depends on my mood.

It takes not only some incredible knowledge of the game, but also some serious dedication to pull off a play like Olofmeister's in the semifinal of ESL One: Cologne 2014. Another Fnatic legend immortalized in the art of the map.

Olofmeister was at the bombsite. He went to diffuse, and suddenly everything was ablaze. The site is on fire; he’s on fire; rumor has it, even the audience burned their toes a little. But nothing was quite as on fire as Olofmeister, clearly! In the heat of the moment, he decided to stay true to what he had begun and finish defusing the bomb. Would he have enough time before he died in a fiery inferno? Would he be taken out? Should he have moved out of the flames? Well, those few seconds felt like a lifetime to us, the viewers, so we can only imagine how stressful this was for Olofmeister and his team.

Because you’re reading this here, you can probably guess that, yes, he was successful. But by how much? Well, immediately after the bomb finished diffusing, Olofmeister dropped dead. He died a hero. A slightly crispy hero.

Now, on Overpass at Hut, you can find some fantastic artwork of another angel counter-terrorist, this time defusing a bomb in flames. Incredible work, well deserved, GG.

The term ‘noscope’ was created for good reason. Hitting those incredible shots without a scope, without that handy zoom-in, is difficult. Like, difficult! We can train our aim all we want, but it goes without saying it takes a serious pro with some significant hours under their belt to hit those more complex shots. And what makes a shot easier? Well, other than a scope, staying still, taking time to line it up, and a non-moving target.

With that in mind, how about making a noscope headshot while jumping. Hard, right? What about three? Consecutively? “Impossible,” I hear you cry. Well, I’d have agreed with you until I saw this play from Coldzera.

It was the semifinal of MLG Major Columbus 2016. Team Liquid and Luminosity Gaming were battling it out for access to the finals. Coldzera of Luminosity would go on to set a new standard in noscope shots. He intercepts all of Team Liquid as they are heading down Apartments to Bombsite B.

He takes out the first opponent, adreN, nothing too fancy, and ducks behind the large step below the rest of the team. He jumps with his AWP pointed in the team’s general direction and, in that split second in mid-air, hits. Taking out EliGE and s1mple with a single bullet. That alone would warrant legend status. But he continues, taking down nitr0 with another noscope!

Luminosity went on to get a 10 round win streak and won the semi-finals. Then going on to win the finals against Natus Vincere. So it’s no wonder that spot is now forever decorated with a winged AWP with four skulls above it. Some sick art for a sick play.

Watch this with some paper handy and take notes!

Wrapping things up, there are some incredibly talented players out there. Their skill is beyond my own comprehension; I’m struggling to make even easy kills in Valorant. F. Maybe one day I can get close to their level? Probably not.

If we missed any, or you think Valve should add another awesome moment, let us know on our socials @glootesports!