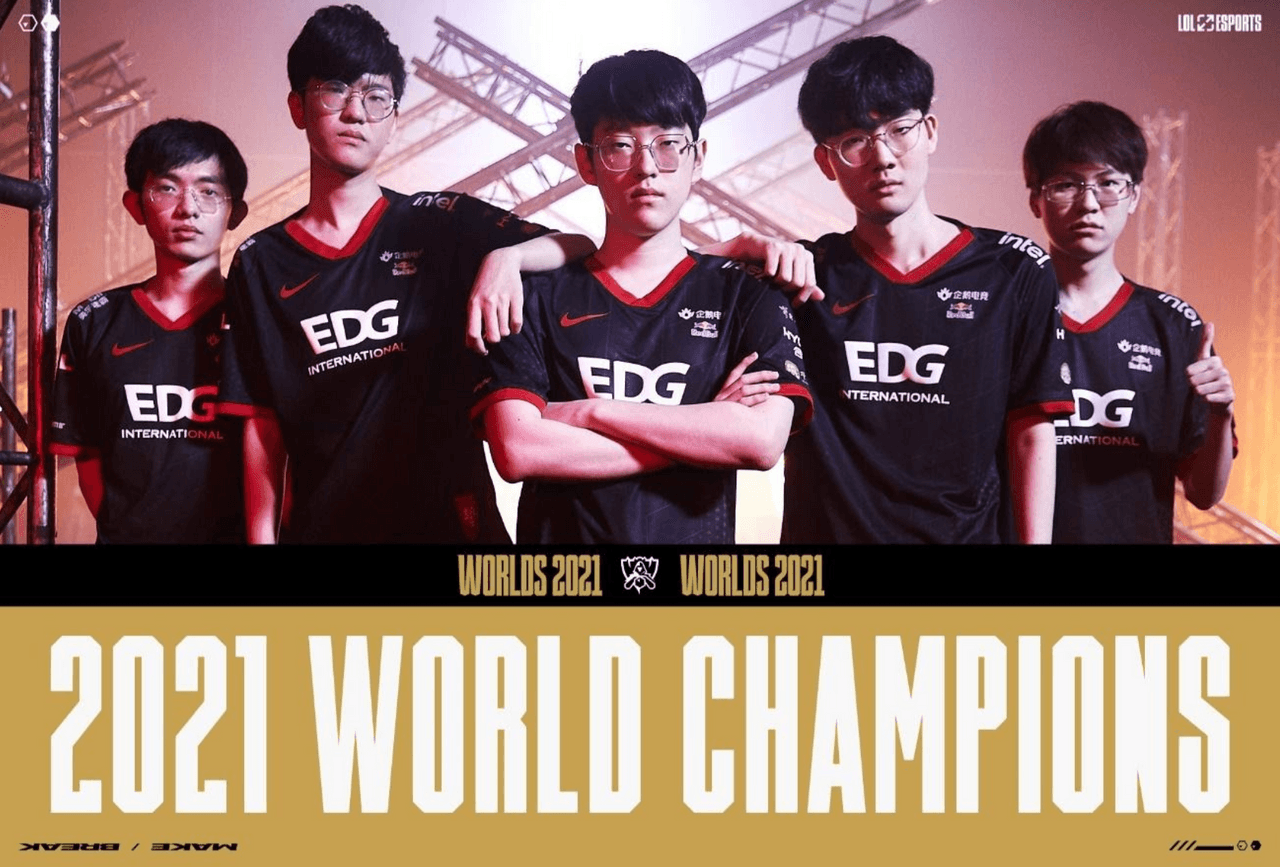 Worlds 2021: one of the best finals in League of Legends history

For the League of Legends competitive scene, Worlds is the pinnacle of the game.

Every professional player dreams of attending and, of course, winning the event. However, this is not easy. Only the best around the globe can make it to Worlds, and there they will have to face off against the best of the best to raise the Summoner’s Cup.

After the tragic 0-4 run of FunPlus Phoenix in the group stage, all eyes turned to DAMWON Kia to take the title as the latest Worlds Champions. The team was seen throughout the year as one of the best in the world. In fact, they finished second place at the first international event of the year—the Mid-Season-Invitational—though they lost 3-2 to the Chinese team RNG in the final.

DAMWON Kia's path to the final

DAMWON Kia was placed in Group A with North American third seed Cloud9, Europe third seed Rogue, and the LPL second seed FPX. DAMWON Kia was seen as the favorite to get out of this group and win the whole tournament. The fans' only question was who would get first place in the group.

The Korean team lived up to their expectations and went undefeated in the group stage, going 6-0 and claiming the first spot. As for FPX, the team placed fourth in the group going out much sooner than most anticipated, in what can be considered the biggest upset in the history in the group stage of Worlds.

In the playoffs, their first adversary was MAD Lions, Europe's last chance at worlds. This European team already had taken DAMWON Kia to five games at the Mid-Season-Invitational though the Korean team eventually came out on top with a 3-2 and advanced to the final. Obviously, fans expected Mad Lions to at least put up a fight and take a game or even two.

However, DAMWON KIA showed why they were seen as the favorites. The Korean team won the series 3-0 and was in control of all the games. Mad Lions weren't able to do much against a fully prepared and well-oiled machine like DAMWON.

At this point, DAMWON Kia had yet to drop a game in the tournament, being 9-0 and looking really dominant.

But that undefeated game streak would come to an end against Korean rivals T1. DAMWON Kia actually took game one in a very convincing way, which left many analysts and casters predicting a 3-0, given the dominance shown by the team in the first game of the series. But T1 was able to bounce back. With some good adaptation in the draft, the legendary Korean organization took games two and three and was one win away from knocking out their rivals.

DAMWON was on the ropes, but that didn't matter to the still reigning champions at that time. They dominated game four winning the game in under 30 minutes and forcing a decisive game 5.

T1 pushed DAMWON like no other team had been able to do in the tournament. Game five was one of the closest in the tournament's history: no team got a significant gold lead, and the way both teams were playing the map was excellent. Despite that DAMWON Kia team fight came up clutch at the end. The LCK champions, having secured the dragon soul, won a crucial fight in the baron pit. Despite T1 securing the baron, they got aced in the following team fight, which allowed DAMWON Kia to break into their base. They didn't end the game but got an inhibitor and one of the Nexus towers. T1 held up, but the decisive moment was the team fight that erupted at the Elder Drake. DAMWON was able to secure the objective and once again aced T1 in the following team fight securing the 3-2 victory and their spot on the final.

After this series, most thought that DAMWON Kia would come out on top no matter who they faced in the final.

EDG and their turbulent road to the final

Contrary to DAMWON Kia, Chinese giants EDG's road to the final was much more turbulent. The team placed second in Group B, where T1 got first, North American champions 100 Thieves finished 3-3 in third place, and the Japanese side team DFM placed last.

In the playoffs, they met a familiar foe in Chinese rivals Royal Never Give Up, a team they had faced a couple of times in the past year. In the first game of the series, RNG played incredibly well; they were always in control of the game and easily took game one in a 30-minute win.

EDG had already lost a best of five against RNG in the spring playoffs, and losing game one in such a one-sided way certainly had EDG fans nervous.

However, they were able to bounce back, and in game two, they stomped RNG getting ahead early and never let their opponents back into the game.

EDG followed game three with another good performance in game four winning a closer game but still one where they had control most of the time, reaching match point.

In the fourth game, RNG refused to go down without a fight, and in a similar way to game one, they won the match pretty easily and forced a fifth game.

The decisive game of the series, game five, saw EDG getting a gold lead in the early game and winning the skirmishers. The team was able to translate their lead into objectives and played the map well, always punishing RNG for any cross-map play they would try to make.

Eventually, EDG's lead became too big: RNG could not win the fights and was too far back. To make things worse, EDG had a good late-game comp, so the chances of RNG being able to come back were really slim. EDG took game 5 and the series, advancing to the semifinals.

In the semifinals, they faced off against Korean team GEN.G Esports. EDG came out ahead, winning a very close game that was decided in a team fight for the Elder Drake.

However, GEN.G was able to win games two and three and reach match point. The team's great early game was a big part of those two victories, with GEN.G finding ways to get advantages in the laning phase and then translating them to the rest of the map.

The Chinese side was able to force a game five with a dominating performance in game four. Like in other games, they got ahead early and never relinquished control of the game.

Both teams showed great adaptability in the draft throughout the series. This made game five even more interesting since the draft played a big part in the outcome of the games, and both teams were adapting very quickly to what their opponents were choosing and the strategies they were using.

The final game of the series would determine who would face off against DAMWON Kia for a shot at dethroning the champions. EDG once again put on a tremendous performance, dominating the early game, with Midlander Scout and superstar ADC Viper both having an impressive performance and booking their ticket to the final.

The first finals to have five games since 2016

DAMWON Kia went into the finals as the favorites. Analysts, casters, and most fans thought this would be a 3-0 victory for DAMWON Kia: that EDG had struggled against inferior teams and had no chance of denying the Korean team of their second Worlds title.

Despite that, EDG wanted to prove everyone wrong, and they certainly did.

In the first game of the series, EDG made a statement: they weren't there just to play; they were there to win. They impressively took the first game and made it clear to the people watching that it wasn't going to be a 3-0 for DAMWONG and that they could expect a competitive series of League of Legends.

In game two, DAMWON struck back. The Korean team got ahead after winning a skirmish at the Herald. They then won a team fight near the drake and got up to a 5k goal lead. After that, they were in complete control of the game and ended up taking the second game.

In the third game of the series, we saw a close match that, once again due to DAMWON Kia's amazing team fight, saw the Korean team take the lead and reach the series point.

At that point, most people thought it was going to be a 3-1 in favor of DAMWON Kia. EDG had been putting a decent fight, but a win for DAMWON seemed inevitable, and the Korean team was close to becoming the second team ever to win back-to-back Worlds.

Game four was do or die for EDG, and the Chinese team refused to die. In a nail-biter of a game, a risky call from EDG to rush Baron worked in their favor giving the team control over the map and allowing them to break into DAMWON Kia base. After that, a good team fight by EDG on the mid lane allowed them to kill three members of DAMWON Kia and march down the mid lane to claim victory.

The series was already one for the ages: back and forth with extremely well played League of Legends and the first finals since 2016 to play the Silver Scrapes. But the final game was the cherry on the cake.

With the Championship on the line, both teams entered the rift, ready to play one of the most important games of their life. EDG reached the mid-game with a slight gold lead of about 2k. The Chinese team was also able to reach the soul point, and that was very important, especially because it was an ocean soul.

The team fight for the ocean soul was the point where EDG took control of the game. The team won the smite battle with JieJie securing the drake and the ocean soul for his team and then ended up winning the fight afterward, with Scout and Viper coming up clutch in the fight.

Canyon was picked up on the top side of the map and died, leaving EDG with a free baron. DAMWON Kia tried cross-map plays and everything n their power to come back to the game, but with EDG having Baron Buff and the ocean soul, the game was in their hands. DAMWON Kia made one last stand inside their base, but EDG won the fight and claimed the victory and the Worlds trophy.

The final MVP was Scout. The Korean Mid laner was a big factor in EDG victory and, after six years in the team, was able to achieve international success.

This was also the first Worlds trophy for EDG. The organization never found much international success, especially at Worlds, where they would always fall short of the expectations people had for them. Finally, one of the biggest organizations in League of Legends could fill the empty space in their trophy cabinet.